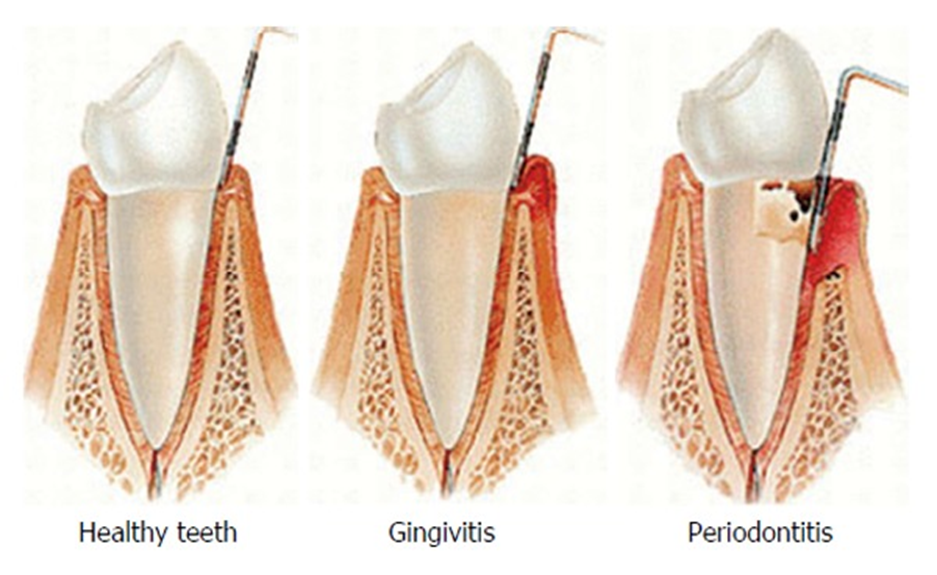 Diabetes and periodontal disease – two different diseases which, at first glance, do not seem to have any similarity. Yet a significant proportion of the population has one of the two diseases and is unaware of the evidence that suggests that there is a causal link between them.

Approximately 8% of the US population has been diagnosed with diabetes, which is characterised by uncontrolled blood sugar levels. At the same time, around 47.2% of adults aged 30 and older have had some sort of periodontal disease. Periodontal disease is a complex condition characterised by many features, primarily gingivitis and periodontitis. Gingivitis is caused by the inflammation of the periodontal tissue (gums). Further inflammation may result in periodontitis, eventually leads to periodontal pocketing, the destruction of tooth-supporting structures and bone loss, and even further complications like tooth loss.

Gingivitis is the primary stage before it progresses and worsens to periodontitis or periodontal disease. The transition from gingivitis to periodontitis involves the spreading of the inflammatory front to deeper areas in connective tissue. The reason why this occurs is not completely known but the presence of bacteria or by-products like lipopolysaccharides may induce this. Furthermore, patients with periodontal disease also have a higher prevalence of Helicobacter pylori (H.pylori). There are cases where gingivitis does not transform into periodontitis as bacterial accumulation is necessary for the disease to worsen in a specific region. More research is being conducted on this disease due to its increasing prevalence in affluent countries. Findings show that while an increased sugar intake in conjunction with poor oral habits contribute to the occurance of these oral diseases, a multitude of other factors such as income, education and smoking also play a part.

So, what is the relationship of this oral disease with diabetes? There is clear evidence to suggest that the causal relationship is both ways. Periodontal disease is seen to be more severe in diabetic patients and there is also poorer glucose level control in patients with periodontal disease. That said, while research is still on-going, the effects of periodontitis and its treatment on diabetes metabolic control are not clearly known.

People with type 2 diabetes are around 3 times more likely to develop dental problems than people who don’t. Those who are type 1 diabetic are also more at risk. Diabetes has multiple links to different oral diseases, even apart from periodontal disease. Salivary and taste dysfunction, oral bacteria, fungal infection and traumatic ulcers are just some of them. One causal link to be suggested between diabetes and periodontal disease is through advanced glycosylation end products (AGEs). Studies show that chronic hyperglycaemia (excess sugar in blood plasma) produces AGEs that bind to specific receptors on different cells like fibroblasts, endothelial cells and macrophages. These cells are turned into hyperreactive cells that produce inflammatory cytokines. Furthermore, diabetes increases the glucose concentration of saliva and this, in combination with harmful bacteria, causes plaque formation which leads to cavities. The formation of plaque near the gum line hardens into a deposit called tartar which is the first step to causing gum disease. Patients with diabetes also receive multiple medications and some may hinder the ability of the mouth to make saliva, increasing the risk of dental cavities.

There are also clear causal links showing that periodontal disease has a part in causing diabetes. Gum disease and infection is shown to increase blood sugar levels too. This not only increases the risk of diabetes but has associations with other complications like heart disease. Further research has presented that periodontitis is associated with elevations in HbA1c in non-diabetic individuals. HbA1c is a vital indicator of whether an individual has diabetes as it measures average blood sugar levels over the previous 2/3 months. However, the mechanism of why the HbA1c levels are higher remains unknown.

Arya Bhatt is a student in London, UK.