Coronary heart disease (CHD) is an illness that is caused by constrictions of the coronary arteries due to plaque build-up (atherosclerosis). It has become one of the deadliest illnesses in the world, as described in the following sections. In some cases, it is also referred to as ischemic heart disease. (CDC, 2019).

CHD is normally caused by an unhealthy way of life. Unhealthy lifestyle habits include smoking, obesity, high cholesterol, and lack of exercise. (Torpy, 2009)

How the causes of coronary heart disease impact the world

As CHD stems from atherosclerosis, it is classified as myocardial infarction and ischemic cardiomyopathy, which are severe conditions.

Nevertheless, CHD is found in approximately 126 million people worldwide and that corresponded to roughly 1.72% of the world’s population in 2020. Thus, it is no surprise that CHD further resulted in 9 million fatalities around the world during the same year.

Despite this, it is predicted that the incidence rate of CHD will accelerate to about 1,845 cases per 100,000 people in 2030, while it lies at 1,655 occurrences per 100,000 individuals in 2020. Thus, CHD incidents are growing worldwide, year by year. This can be put down to growing rates of conditions such as obesity, metabolic syndrome, and diabetes. Further contributing to this is the aging of the global population – CHD is more prevalent in older people.

It is also apparent that both males and Eastern Europeans are more likely to be affected by CHD than other people. This is evidenced by 264 additional occurrences in males compared to females. In the same way, Eastern Europeans have more cases, as opposed to other areas, as illustrated in figure 1. 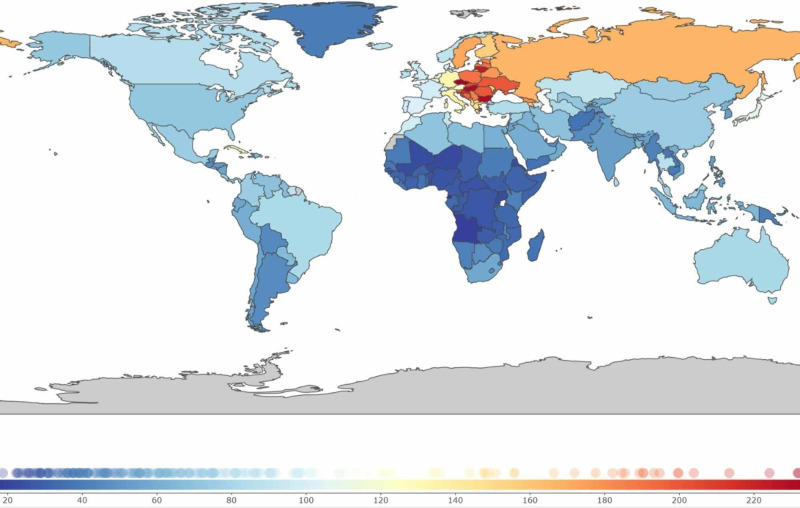 Interestingly, the majority of persons (~70%) that are at risk for CHD suffer from, not one, but several factors that increase their chances of getting the disease.

Furthermore, from a financial standpoint, it is important to reduce the amount of CHD incidents since treatment comes at a high cost. This is demonstrated by the fact that the cost of treating CHD will require 1 trillion USD in 2030, while 863 billion USD was sufficient in 2010. (Khan et al., 2020)

Ultimately, all of the aforementioned indicates that CHD is a global issue and results in many fatalities and also economic impairment as a consequence of treatment.

How to minimize the effect of CHD

The best way to avoid experiencing CHD is to adopt a healthier lifestyle. A healthy lifestyle, according to the National Health Service, contains the following components.

First of all, blood pressure should be managed. Blood pressure can be negatively affected by consuming a diet that consists of highly saturated fats, living a sedentary lifestyle, and not taking blood pressure medication when it is necessary.

Second of all, it is recommended to refrain from smoking and drinking alcohol as they both contribute to CHD. Smoking strengthens the chances of atherosclerosis, while alcohol heightens the risk of encountering a heart attack.

Some of the previously mentioned facts also call for an improved diet. A good diet is varied, and such a diet is made up of mainly high-density lipoproteins boosting foods (HDL), large quantities of fiber as well as fruits, vegetables, and whole grains.

It is essential to know the difference between “good” and “bad” cholesterol. HDL is known as “good” cholesterol since it prevents the build-up of plaque. It does this by transporting low-density lipoproteins into the liver where they are broken down. Conversely, LDL is “bad” cholesterol since a surplus of LDL causes deposits of plaque in the arterial walls of blood vessels. This slows the flow of blood, therefore, resulting in conditions such as angina, which may lead to heart attacks further down the line. Consuming excessive volumes of sugar is not advised either, as this increases the likelihood of contracting diabetes, which could potentially lead to CHD too. Exercise and a healthy diet are recommended since a healthy heart can endure pumping more blood than an unhealthy heart. A strong diet and exercise both keep blood pressure at a reasonable level. (National Health Service, 2020)

Considering all of the above, CHD is costly, which is demonstrated in patients through life-degrading lifestyles. From an economical perspective, CHD claimed 863 billion USD in treatments in 2010 and is expected to rise to 1 trillion USD in 2030. However, the damages of CHD can be diminished by people at risk adhering to a better lifestyle to avoid risk factors.