This article discusses vaccinations through the lens of poxes, namely the small poxes that inspired Edward Jenner and the rapidly rising cases of monkey pox around the world.

Poxes have a large double-strand DNA genome and an oval shape. Animals are the major carriers of the virus, and they also cause it. Poxes come in a variety of forms depending on which animal the virus originated in, and direct contact with these animals can spread the disease to humans. Close human contact can spread the infection through clothing, bed sheets, and other items. Chickenpox, smallpox, and monkeypox are some of the most prevalent poxes. Chickenpox comes from chickens, monkeypox comes from monkeys, and smallpox is caused by the variola virus (WHO). General symptomsof pox viruses are normal fever symptoms but with small red spots developed on skin, causing blisters and scabs. People with poxes normally recover themselves in a month. Smallpox hasn’t been seen since 1977, but monkeypox is a new virus that has lately spread, and both of these poxes will be explored in this study.

Development and Vaccination of Small Pox

Smallpox is an ancient virus that was first discovered in Egypt’s mummies 3000 years ago, and it was also detected in China during the Han Dynasty. After that, the virus spreads to neighbouring nations like Korea and Japan before reaching Europe. There is no evidence that smallpox can be transferred by animals or insects; it can only be spread by people. The main smallpox outbreak in the United States happens in Boston, Massachusetts, in 1721. (NCEZID, 2021). This pandemic resulted in almost 6000 cases of smallpox, with 850 people dying out of a population of 11000. This outbreak, however, resulted in significant advancement in the vaccination of poxes such as smallpox and monkey poxes (Matthew Niederhuber, 2014). Smallpox is caused by the variola virus, as seen in the diagram below.

The pandemic was eventually brought under control by a free mass vaccination campaign developed by Edward Jenner, an English physician. In 1976, he found that milkmaids who worked in close proximity to cows were typically immune to the smallpox outbreak. This enables a more thorough analysis of the two, and it was discovered that the milkmaids had been exposed to cowpox and are immune to smallpox. He then brought the cowpox sample and had it injected into the armpit of his gardener’s son. The 9-year-old youngster did not develop smallpox, which was also noted. Following multiple tests, the shot was acknowledged as a smallpox vaccine by the general population. The World Health Organization (WHO) began promoting a plan to eradicate smallpox in 1959. The concept was initially underfunded and did not succeed. In 1967, however, countries had progressed in laboratory technology and were able to mass-produce smallpox vaccines. From 1967 to 1977, vaccine programmes became popular in several countries, and evidence of smallpox extinction appeared all across the world, one by one, from North America to Africa. In 1975, a Bangladesh woman was diagnosed with smallpox and was quarantined until all symptoms were gone. This demonstrates that mass vaccination can have a significant positive impact on health emergencies by bolstering a large population’s defence system.

Development and Vaccination of Monkey Pox

Monkeypox is a zoonotic illness caused by the monkeypox virus, which is transmitted from monkeys to humans. It was first discovered in the Democratic Republic of the Congo in 1958 (NHS, 2022), just as smallpox was becoming more manageable. Only Central Africa and the United States had similar monkeypox outbreaks before 2003, which were blamed on African immigrants. Since 2018, there have been fewer than three cases of monkeypox worldwide each year, but a cluster of cases was detected in different places of the world in 2022, potentially resulting in a monkeypox outbreak. The pattern of monkeypox transmission globally and data on monkey pox cases reported in Central Africa are depicted in Figures 2 and 3. This demonstrates that monkey pox was virtually unknown prior to 1980, and that cases increased dramatically after 2000. 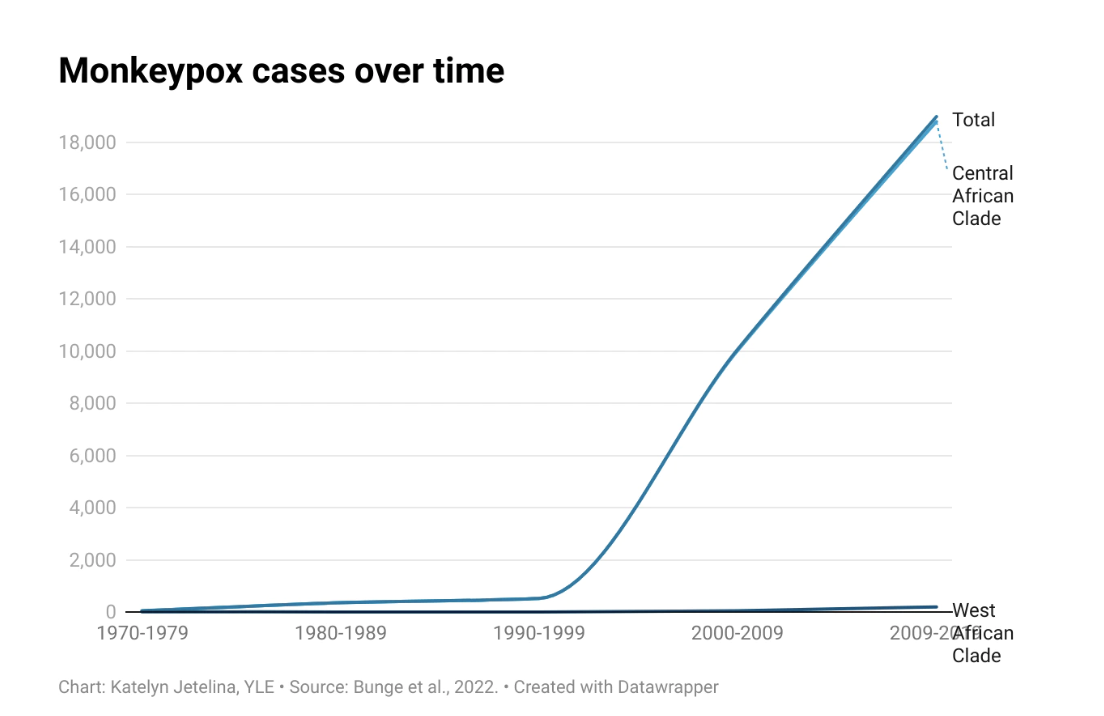 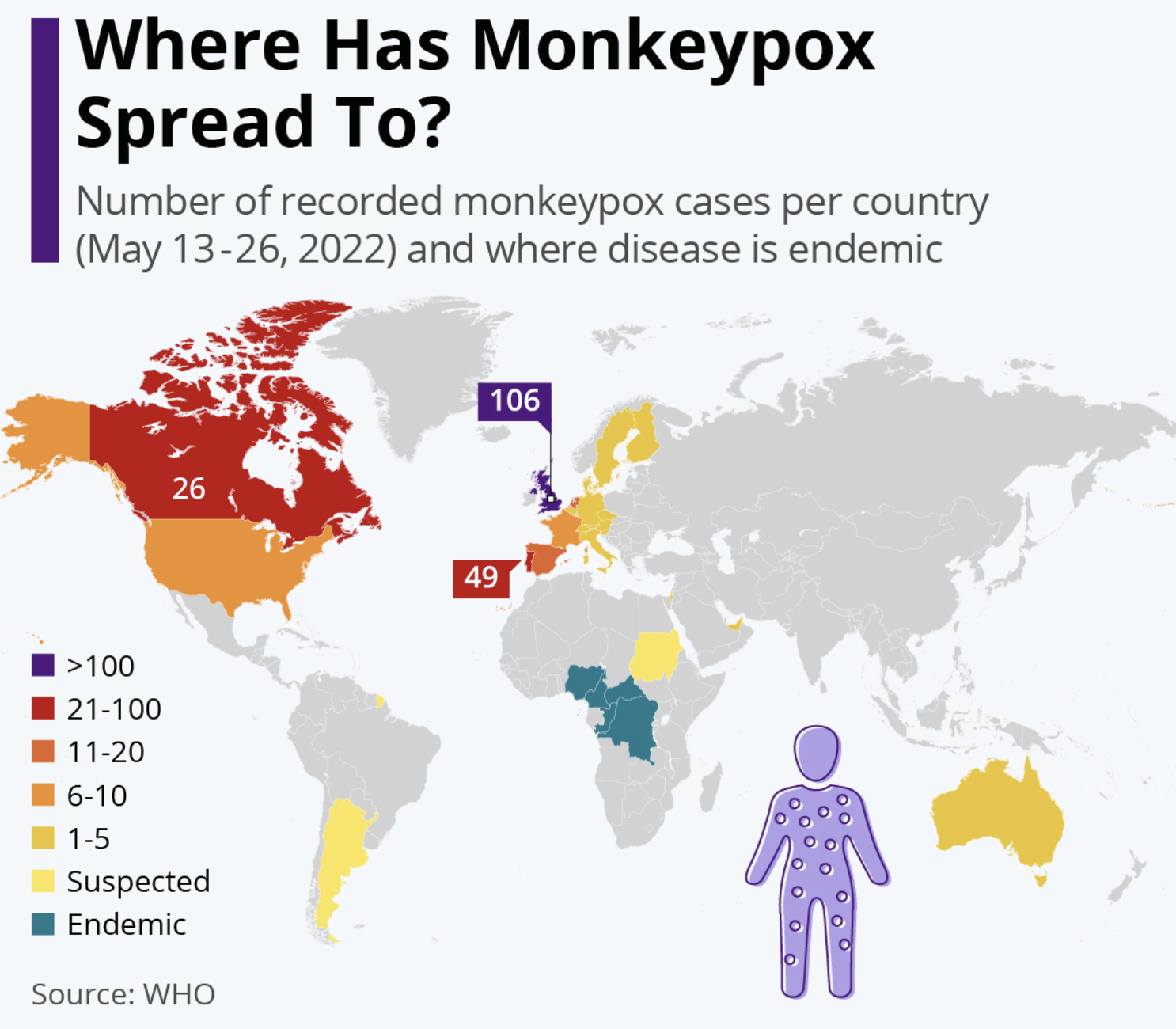 Monkeypox virus and variola virus are belong to the Poxiviridae family, the structure of the monkeypox virus is identical to that of the variola virus that causes small pox, as seen in figure 4 below (Medscape, 2020). The fundamental distinction in symptoms is that monkey pox causes lymph node enlargement, but the variola virus does not. They both grow red patches on the skin’s surface, which later turn into blisters.

Monkeypox is difficult to pass between humans, however it can be carried through close contact via bedding and clothing like transmission of variola virus, as well as sexual contact. According to the WHO, 780 instances of monkeypox have been reported in countries where the virus is not common (BBC, 2022). Some people who have monkey pox have not recently travelled to affected areas, indicating that the disease is already spreading through direct contact between people. The United Kingdom has the highest number of instances of monkey pox. ‘Although the number of verified cases is not alarming, an outbreak might occur if the disease continues to spread internationally,’ according to the WHO. The majority of those infected with monkey pox in the UK (111 out of 183 confirmed cases) are young men in London, particularly gay men who have had sexual contact with other men. However, gay men are not the only ones who are at risk.

Many aspects must be examined when determining whether vaccination is mandatory and enforced in a country, including the patient’s health, religion, and vaccine availability in the country. As a medical professional, offer should be made for patients to respect autonomy and the freedom to select whatever they want for their bodies, but it is also the responsibility to tell patients about the benefits and limitations of vaccinations, which must be accomplished through mass education and government backing. As a result, several countries’ immunisation programmes and inventions have failed. When it comes to COVID-19 immunisation, one of the main reasons for the virus’s global spread is that the virus is brand new, and it takes a long time for vaccines to be developed and for the public to trust science. This demonstrates the need of medical professionals collaborating with the government to avoid the spread of outbreaks, such as the rising cases of monkey pox virus, before things get out of hand. In general, poxes, particularly monkey poxes, are not particularly contagious if personal hygiene and public knowledge on the virus are improved, and it may disappear like small pox if the public is properly informed about the virus and willing to obtain immunizations against it.

1 zoonotic disease: disease that spreads from animals to humans

The Fight Over Inoculation During the 1721 Boston Smallpox Epidemic – Science in the News. (2022). Retrieved 10 June 2022, from https://sitn.hms.harvard.edu/flash/special-edition-on-infectious-disease/2014/the-fight-over-in

Hello, my name is Mary, and I am from Hong Kong. I am now in year 12 in the UK and intend to pursue a career in medicine. I'm primarily interested in paediatrics, but I'd like to learn about a variety of medical areas to broaden my medical knowledge and experience.