Psychedelics, additionally known as hallucinogens,  are a class of drugs that are hallucinogenic, and can cause changes in perception, mood, and cognitive processes when they are taken by individuals (1). The most well-known psychedelic is psilocybin  – the key compound in magic mushrooms, which are prominent for the hallucinogenic effects they induce when ingested (2). There are over 180 species of mushrooms that contain psilocybin and can be found all over the world (2). The most widespread species of these mushrooms found in Europe is the liberty cap mushroom (Psilocybe semilanceata), which is small but incredibly potent (2).

LSD (Lysergic acid diethylamide) is another type of psychedelic, which is derived from the ergot fungus which infects rye. Psychedelics have been used for centuries, predominantly in relation to mysticism and spirituality amongst non-western cultures (1). Recently, however, there has been a re-emergence of psychedelic drugs in medicine, more specifically as a treatment method for conditions such as depression, anxiety, and obsessive-compulsive disorder (OCD). Psychedelics have further clinical applications in psychiatry, such as in psychotherapy (3). Despite the promising prospects of using psychedelics as a treatment method – particularly psilocybin – there currently are laws in place that prohibit the distribution and sale of such substances, and as a result mean that research into its clinical usage is heavily restricted.

How Psilocybin Affects the Brain

Once ingested, psilocybin is rapidly metabolised into psilocin inside the body – and the latter is a chemical that has psychoactive properties. Psilocybin is therefore considered a prodrug – as it is a relatively inactive drug until it has been converted into an active drug (psilocin) after ingestion. Both psilocybin and psilocin are psychedelic tryptamines that have structural similarities to serotonin – a hormone which has a multitude of functions including stabilising mood, aiding digestion, and controlling sleep (4). This similarity allows psilocin to bind to receptors in the brain that serotonin is able to bind to, and one of these receptors which is especially important is the 5-HT2A receptor, which the psilocin will bind to (2).

It is when the psilocin binds to the 5-HT2A receptor that its hallucinogenic properties are activated in the brain. The activation of this specific receptor is associated with cognitive changes in the brain – including tactile perceptions (such as a feeling of warmth), auditory and visual hallucinations, and synaesthesia (the amalgamation of senses) (12).

Serotonin is often colloquially referred to as the ‘happiness molecule’, as when it binds to its receptors, serotonin can regulate mood and happiness – and having stable, healthy levels of serotonin means that you should feel more emotionally stable and happier (4). However, when psilocin binds to the receptors that serotonin connects to, the same effect is not induced. Instead, psilocin can impact other regions of the brain, and this is why psilocybin is being researched as a treatment method for conditions such as depression. This is known as psilocybin-assisted therapy and is conducted using dried magic mushrooms (6).

The Chemical Structure of Psilocybin and Psilocin 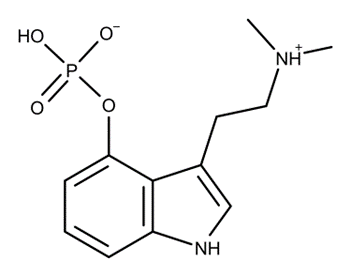 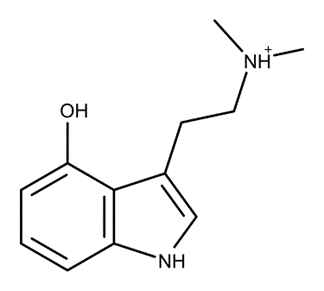 Johns Hopkins University has conducted research into the clinical use of psychedelics in the treatment of depression and is continuing to pursue this. In 2016, Johns Hopkins carried out research in this field, where psilocybin was used to relieve anxiety and depression in patients who had recently been diagnosed with terminal cancer (7).

(8) In November 2020, a new study by Johns Hopkins Medicine suggested that psilocybin could be incredibly effective in treating individuals with chronic depression. This finding was based on the results of a clinical trial involving 24 patients who all had a major depressive disorder. The patients involved in the study were selected randomly, and all adhered to a list of eligibility criteria: having a diagnosis of major depressive disorder (MDD), not taking antidepressant medication, without history of a psychotic disorder, and without prior hospitalisation.

(8) The 24 participants of the study each underwent two sessions of psilocybin. In the first session, 20mg/70kg was administered via a gelatine capsule alongside approximately 100ml of water, and 30mg/70kg in the second session via the same method. Some of the participants began treatment immediately while others waited eight weeks – and these groups were selected randomly. The severity of the participants’ depressive disorders was assessed before and after the trial using the GRID-Hamilton Depression Rating Scale (GRID-HAMD). The group which received immediate treatment was assessed again in weeks 1 and 4, while the group which received the delayed treatment were assessed at weeks 5 and 8 – in order for the time between these stages to correlate for the two groups. Out of the 24 participants, 12 at week 1 and 17 at week 4 showed over a 50% reduction in their GRID-HAMD score, and 14 participants at week 1 and 13 participants at week 4 were in remission from their major depressive disorder.

(8) Ketamine is another psychedelic drug that has previously been studied for its effects on treating severe depression. However, the effects of ketamine have been found to typically only last for up to two weeks, while psilocybin therapy has been shown to remain effective for at least four weeks. Furthermore, ketamine is considered to be more addictive than psilocybin – and so the latter has potentially lower risk for treatment.

In a TED talk by the clinical psychologist Rosalind Watts (14), she discusses her part in a psychedelic research group at Imperial College, London,  investigating the use of psilocybin to treat depression. This clinical study was conducted in 2016 and consisted of 20 participants who all had treatment-resistant depression – and individually they had all tried between 3 and 11 different types of antidepressants, none of which they found to be effective. These participants were all given high doses of psilocybin in a therapeutic session, and six months after the first dosage 6 of the participants had remained in remission from depression – with no symptoms. For 11 of the participants, their depressive symptoms had been significantly reduced for 2 months following the psilocybin treatment, but then they began to return. Compared to antidepressant medications which have to be taken daily and take several weeks to become effective, psilocybin as a treatment method for depression is incredibly promising – not only being more active for longer periods of time but also reducing symptoms almost immediately.

Psilocybin has also been researched into treating anxiety, particularly in conjunction with terminal illnesses. For instance, in 2011, there was a pilot study of using psilocybin to treat anxiety in patients with advanced-stage cancer between June 2004 and May 2008 (9). This pilot study consisted of twelve participants who all had advanced-stage cancer and a diagnosis of any of the following conditions: acute stress disorder, adjustment disorder with anxiety, anxiety disorder due to cancer, or generalised anxiety disorder. Each participant took part in two treatment sessions; they were informed prior to them that in one of these sessions they would receive active psilocybin (0.2mg/kg) and the placebo (niacin, 250mg) in the other. The study was conducted as a double-blind trial. (9)The participants were assessed with a variety of measures, including with the Brief Psychiatric rating Scale and State-Trait Anxiety Inventory (STAI) before the treatment sessions, two weeks after the sessions and then monthly for the following six months. This study did yield some positive results, including the majority of the participants describing having improved mood two weeks after receiving the dose of psilocybin, and a ‘sustained decrease in STAI trait anxiety was observed for the entire 6-month follow-up’. However, the article documenting this study did comment that more studies involving a greater number of participants and a higher dose of psilocybin would likely result in more significant results in reducing anxiety.

Moreover, psilocybin has also been utilised to treat obsessive compulsive disorder (OCD). A double-blind study carried out between November 2001 and November 2004 led by Dr Francisco A. Moreno, Professor of Psychiatry at the University of Arizona College of Medicine (10) in which the effects of psilocybin on symptoms of OCD were investigated (11). There were nine participants in the study, who all had been diagnosed with OCD and had no other major psychiatric disorder. Each participant underwent four sessions of exposure to psilocybin. The dosages were either very low (25 mg/kg), low (100mg/kg), medium (200 mg/kg) or high (300mg/kg) – each participant received one of each dose. The low, medium, and high dosages were administered in that order, but the very low dosage was used at a randomised point for each participant. There was a period of one week between each session.

(11) The participants were all examined before the study began using the Yale-Brown Obsessive Compulsive Scale (YBOCS), and after the psilocybin sessions it was reported that all the participants exhibited significant decreases in their OCD symptoms. This decrease was wide-ranging amongst the participants, from 23 to 100%.

Legality of Magic Mushrooms and Psilocybin

(13) Psilocybin is derived from what are colloquially known as ‘magic mushrooms’, and these are prohibited in most countries. The 1971 UN Vienna Convention attempted to introduce stricter legislation regarding synthetic drugs like LSD, and this led to the instigation of laws in many countries that banned many drugs and other hallucinogenic substances. Examples of such laws include the US Psychotropic Substances Act and the Misuse of Drugs Act in the UK. (13) Currently psilocybin is only legal in the British Virgin Islands (though only for personal use), the Bahamas, Samoa, the Netherlands, Nepal, Brazil, and Jamaica. Even though psilocybin is obtained from magic mushrooms, many countries have different laws regarding the two substances, and these laws are often not straightforward. For instance, in Portugal magic mushrooms are decriminalised – so that one can possess them but if caught has to undergo court-mandated rehabilitation. Additionally, in Mexico, psilocybin is illegal to possess or sell, unless It is for sacramental usage. Furthermore, in the Czech Republic, it is not a criminal offence to grow a ‘small’ quantity of magic mushrooms for personal use but possessing a ‘large’ quantity is illegal – yet the exact amounts that constitute ‘small’ or ‘large’ are not clearly defined.

Despite psilocybin (and magic mushrooms) being strictly prohibited in many locations across the world, this is slowly changing – for instance, in 2020, the state of Oregon in the USA instigated the decriminalisation of possessing all drugs (15). The global attitude towards unconventional treatment methods, such as psychedelics in clinical settings, is shifting – and can mean that it is possible in the future that further research into psychedelic therapy is carried out. It is indisputable that psilocybin does have a profound effect on reducing symptoms of conditions such as depression, anxiety, and OCD – and this is incredibly important as current treatment medications for these conditions are not always effective and can have taken a long time to work. Psilocybin in magic mushrooms has been used for centuries in traditional practices in many cultures, and yet it is only recently that the application of psilocybin in a professional setting has been considered. The small number of participants in the studies involving psilocybin treatment to date have exhibited significant positive results, and future clinical trials and studies should optimistically yield the opportunity to benefit many more individuals.

3. Royal College of Psychologists: “From Sacred Plants to Psychotherapy – The History and Re-Emergence of Psychedelics in Medicine” by Dr Ben Sessa – https://www.rcpsych.ac.uk/docs/default-source/members/sigs/spirituality-spsig/ben-sessa-from-sacred-plants-to-psychotherapy.pdf?sfvrsn=d1bd0269_2

9. Journal of the American Medical Association; Psychiatry: “Pilot Study of Psilocybin Treatment for Anxiety in Patients With Advanced-Stage Cancer”- https://jamanetwork.com/journals/jamapsychiatry/article-abstract/210962

11. National Institute of health; National Library of Medicine: “Safety, tolerability, and efficacy of psilocybin in 9 patients with obsessive-compulsive disorder” – https://pubmed.ncbi.nlm.nih.gov/17196053/

Samara MacRae is a student at Brighton College, England. She hopes to pursue medicine in the future, and is especially interested in surgery and emergency medicine.