Haemoglobin is the red pigment that helps carry oxygen around the body, and two key concepts associated with this are the oxygen dissociation effect and cooperative binding. This article examines the link between chemistry and biology in order to explain how cooperative binding actually works.

Haemoglobin is a complex iron-containing protein with the function of carrying oxygen around the body. Although there are multiple types of haemoglobin, this article concerns Adult Haemoglobin (HbA).

In areas with a higher partial pressure of oxygen (pO2), such as the lungs, the haemoglobin binds to oxygen to form oxyhaemoglobin. In areas with a lower pO2, such as the muscles, the oxyhaemoglobin dissociates and oxygen is unloaded. This is important because this protein satisfies the dual (and seemingly conflicting) roles of loading oxygen from areas of high oxygen concentration and being able to unload at areas of low oxygen concentrations, where oxygen is being needed. It does this through changes in affinity for oxygen under different environments. Furthermore, as more oxygen molecules bind to it, it causes a conformational change in the haemoglobin that allows the second oxygen molecule to bind more easily. This is known as cooperative binding.

To understand how oxygen binds to haemoglobin, we must first understand the structure of haemoglobin itself. It is made up of 4 monomers, with each consisting of a haem group and a globin, as suggested by its name. The globin is a polypeptide that can either be an α-chain (of 141 amino acids) or a β-chain (146 amino acids)1. Their secondary structures are very similar and all contain a majority of α-helices (spiral-shaped structures of amino acids due to the hydrogen bonding between the amino groups and carboxylic acid groups of different amino acids) and some β-pleated sheets. They each have a prosthetic haem group which is responsible for carrying one O2 molecule each, allowing one haemoglobin to carry four oxygen molecules at full capacity. The chains are interlinked through various hydrogen and ionic bonds and folded into a spherical shape – hence it is called a globular protein. 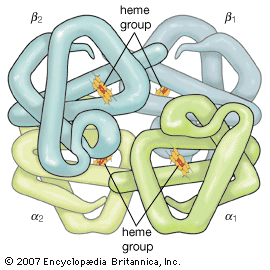 Each haem group is a metal complex. It consists of a ferrous (Fe2+) ion (drawn in orange) surrounded by a porphyrin ring (this is drawn in black below), which is a polydentate ligand1. The R groups are variable groups that I have not drawn in.

Generally, transition metals are considered thermodynamically stable when they have 18 valence electrons (one s orbital, three p orbitals and five d orbitals)2. Thus, in the case of Fe2+, which has the electron configuration [Ar] 3d6 – it needs twelve electrons to achieve the next electron configuration of a noble gas. In the haem metal complex, there are already four coordinate bonds from the porphyrin ring (each N has a lone pair that allows it to form a coordinate bond) that supplies eight more electrons. Now the Fe2+ needs four more electrons – so it is able to make two more coordinate bonds.

An individual amino acid in a protein is known as a residue. One of these coordinate bonds is made with the N of the residue linking it to a polypeptide chain – this amino acid is often histidine3. Since it is directly bonded to the ion, it is called a proximal histidine. Therefore, a deoxygenated heam group only has five coordinate bonds.

If the difference in energy between the high and low energy orbitals (Δ) is small, it is energetically favourable for electrons to occupy as many of the 3d orbitals as possible, the ‘high-spin’ arrangement. In the high-spin arrangement, electrons occupy the two orbitals that point directly at the ligands and the extra repulsion with the lone pairs increases the radius of the Fe2+ more than the low spin arrangement.4,6

Caption: Each box is a d-orbital and each arrow is an electron. In the high spin arrangement, the top row is the high energy d-orbitals and vice versa.

When oxygen forms the last coordinate covalent bond,  the  Fe2+  ion changes to the low-spin d6  state. When  O2 is attached to the iron, this causes an increase in Δ that is enough to change to the 3d6  low-spin arrangement. If Δ is more than the ‘pairing energy’ (the repulsion between two electrons in the same orbital), then the ‘low-spin’ arrangement is more stable by maximising pairing in orbitals. The Fe2+ radius is smaller and is able to fit into the cavity in the porphyrin ring and is now planar. This movement of the Fe2+ moving into the ring also causes the histidine to be pulled up too.

When none of the haem groups has oxygen bound to it, it means all of the ferrous ions are in their ‘domed’ and distorts the porphyrin ring and the bond between the histidine and ion is strained. This strain is transmitted to the rest of the polypeptide chains. They are in a tensed (T) state and cannot leave it unless all of them have been bonded to oxygen (since they are tightly packed together).1
When histidine has been pulled along by the ferrous ion once the oxygen has bonded, this strain is relieved and pulls surrounding amino acids and the polypeptide. This disrupts the salt bridges and interactions between the chains, consequently changing the overall shape of the protein by rotating one pair of α-chain and β-chain 15 degrees relative to the other pair. This causes successive oxygens to bond more easily (increasing the affinity for oxygen as more bind). Once all four oxygens have bonded, the haemoglobin is more relaxed (R state).1,5

Essentially, the haem group is made of a ring and a ferrous ion (which is also bonded to an amino acid of the polypeptide chain). When an oxygen molecule binds to this ion, the ion is small enough to fit directly inside the ring and pulls the amino acid along. This pulls the rest of the polypeptide along, which affects interactions between the four polypeptide chains, causing a change in the shape of haemoglobin. This makes it easier for the oxygen molecules to bind to the rest of the other haem groups in haemoglobin, thus illustrating cooperative binding.