Blood is a transport liquid pumped by the heart to all parts of the body and vice versa to repeat the process. It is also a tissue with a collection of similar specialized cells that serve particular functions. It is composed of red blood cells for transportation of oxygen and carrying back of carbon dioxide to exhale, white blood cells to fight infections, platelets to heal by clotting of blood in injuries, and plasma for circulation of platelets and blood cells in the body.

Artificial blood is a blood substitute used to mimic and fulfill some vital functions of the biological blood like the transport of oxygen and carbon dioxide. It is useful during life-sustaining conditions with serious blood loss. They cannot carry out secondary functions like fighting infections. Nowadays with the growing need for blood and reduced availability of donors, the creation of artificial blood is a need for millions.

Human blood has a composition of products that need to be added to make artificial blood. First and most importantly it should ensure compatibility thus in this case the types of blood should not vary and be similar for all. It should also fulfill the purpose of the patient’s safety, to be able to process and remove the disease-causing agents like microorganisms, bacteria, and viruses, being pathogen-free. Secondly, the important aspect is regarding the transportation of oxygen and carbon dioxide. This feature is considered to be fulfilled by recent research. Third, it must be shelf-stable. Human blood can only be stored for a relatively short period. According to the Red Cross, storage of blood cells is done in the refrigerator at 6°C for 42 days, while platelets can be stored at room temperature in agitators only for 5days. So unlike donated blood, artificial blood should be able to be stored for at least a year or more.

Perfluorocarbons are a group of human-made chemicals composed of carbon and fluorine. They are thought to be used to design artificial blood and dissolve about 50 times more oxygen than blood plasma. They are inexpensive and do not require any biological materials. In making it useful for artificial blood ongoing research is in talking terms in which certain hurdles have to be overcome. Firstly, correction in its solubility in water has to be brought about, which can be achieved by its combination with emulsifiers that can suspend its tiny particles in the blood. Secondly, the quantity of Perfluorocarbons has to be large as they carry much less oxygen than hemoglobin-based products. Thus improved emulsions will be developed in the subsequent time, the process of which has begun.

Hemoglobin carries oxygen from the lungs to the other body tissues. Artificial blood made according to this principle has an advantage due to its natural function. Unlike in Perfluorocarbons, the oxygen covalently bonds to hemoglobin. It has another advantage of eliminating blood typing as they aren’t contained in a membrane and are different from the whole blood. Along with having the pros, hemoglobin-based also has some cons. Firstly, stability is an issue.

Secondly, its raw material cannot be used as it would lead to breaking down into small toxic products inside the body. Therefore artificial blood hemoglobin-based should be made by resolving these issues. The stability of it can be brought about by chemically cross-linking or using recombinant DNA technology to produce modified proteins.

The cross-linking has specific chemical cross-links which prevent dissociation to dimers or monomers. Therefore these hemoglobins attain the properties of solubility and stability. Thus it is expected that these modified ones should have a greater ability to carry oxygen than our red blood cells. The research is going on and its availability is expected to be within some years.

Perfluorocarbons involve polymerization reactions for the making of artificial blood. Hemoglobin-based products are mostly preferred which can be used by isolation or synthetic production with the use of amino acids. It also uses specific types of bacteria and materials needed to incubate it like warm water, glucose alcohol, urea, acetic acid, and liquid ammonia. Later the process involves molecular modification followed by reconstitution in an artificial blood formula. A strain of E.coli bacteria is taken and in three days the harvesting of protein is done along with the destruction of the bacteria.

Then starts with the fermentation process where bacterial culture is transferred to the test tube containing all the required nutrients for growth. This step results in bacterial multiplication and transferring to a seed tank which later is transferred to a fermentation tank. This leads to the production of hemoglobin after which the tank is emptied and the isolation process begins. Here the hemoglobin is isolated with the centrifugal separator and purified by fractional distillation. Lastly from here, it is transferred for final processing. It’s mixed with water and electrolytes for the production of usable artificial blood which is later pasteurized and packaged. 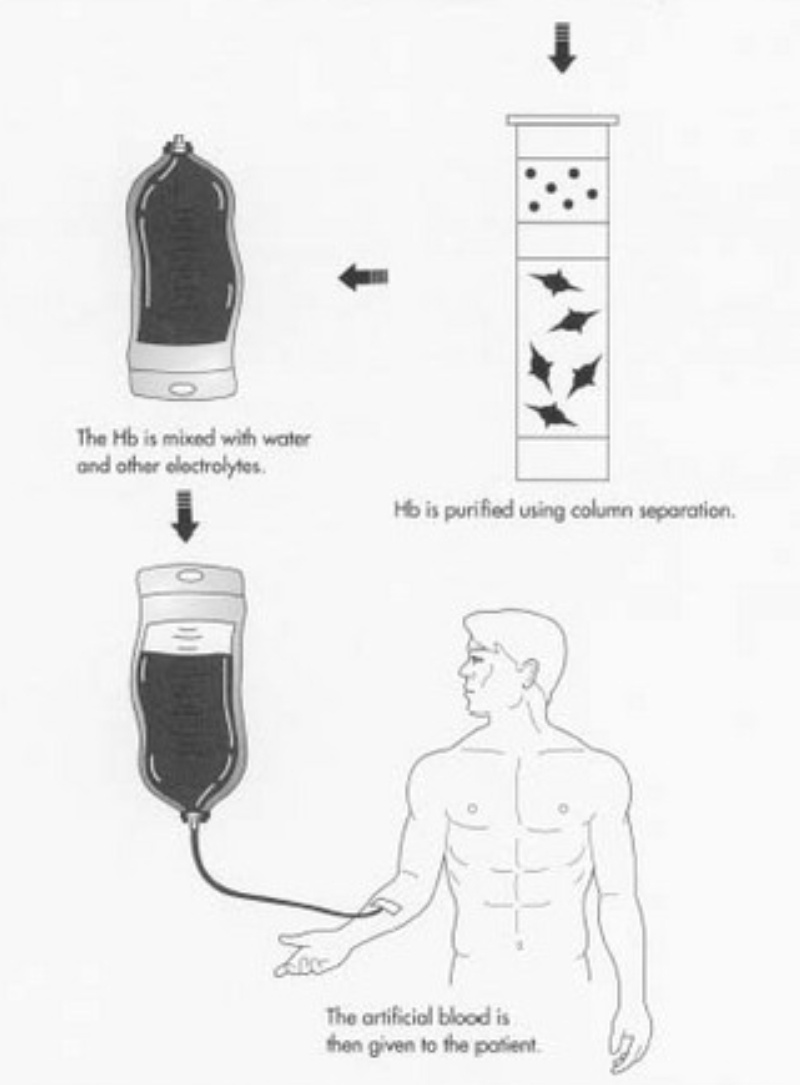 The various types of artificial blood are restricted to certain limitations. Researchers and scientists are also coming up with the idea of using hematopoietic stem cells for the production of artificial blood. This is said to have similar morphology with a similar amount of hemoglobin as the natural red blood cells. The Food and Drug Administration is examining the safety of this blood along with its cost-effectiveness. It may also serve as a blood donor to all common blood types. Along with all this currently, many companies are working on the production of safe and effective artificial blood by clearing the various limitations. In the future, it is anticipated that new materials to carry oxygen in the body will be found. Additionally, long-lasting products will be developed, along with the products that perform other functions of the blood effectively. Hopefully, investigations carried out will be beneficial in the upcoming times.

(1)Patrick Davis, C. (2020, July 17). What Is Artificial Blood and Why Is it Used? MedicineNet. https://www.medicinenet.com/what_is_artificial_blood_and_why_is_it_used/article.htm.