Unlike communicable diseases, non-communicable diseases haven’t seen a drop in figures in recent years. Known as ‘the product of economic development and globalisation of western lifestyle and diets’, they kill over 40 million people annually (70% of deaths worldwide)[1] and dominate mortality and morbidity in advanced countries. Today they affect people in every continent and from all cultures.

What Are Non-Communicable Diseases (NCDs) and How Are They Caused?

NCDs can be known as chronic diseases and cannot be spread from person to person.They are usually caused by a combination of genetic vulnerabilities combined with physiological, lifestyle and environmental factors. For example, factors range from living in poverty or polluted surroundings to poor diet, tobacco and alcohol use.

NCDs include a variety of diseases ranging from 5 main groups: cancer, cardiovascular diseases (e.g. heart attacks or stroke), diabetes, chronic respiratory diseases (e.g. asthma) and mental disorders and other mental health conditions. Previously, mental health has been overlooked as a part of NCDs but recently UN member states expanded to a ‘five-by five approach’ to effectively tackle the prevention and control of NCDs [2]. Mental health’s integration along with these 4 common groups of NCDs is important as mental conditions often occur in conjunction with other physical NCDs and their risk factors often overlap. Another large misconception around NCDs is that they mainly affect the developed world, whilst diseases of poverty mainly affect the developing world. This sometimes leads to failure in regarding iit as a global health priority.

What Are The Risks of NCDs?

Over-nutrition and excessive consumption of sugar, carbohydrates, fats and salts are becoming increasing health risks. These heightened risks are exacerbated by obesity and physical inactivity, which are increasingly apparent in younger age groups. Today these factors are being encouraged due to lifestyle and society changes.

NCDs impact both the rich and poor causing a large burden of disease globally. 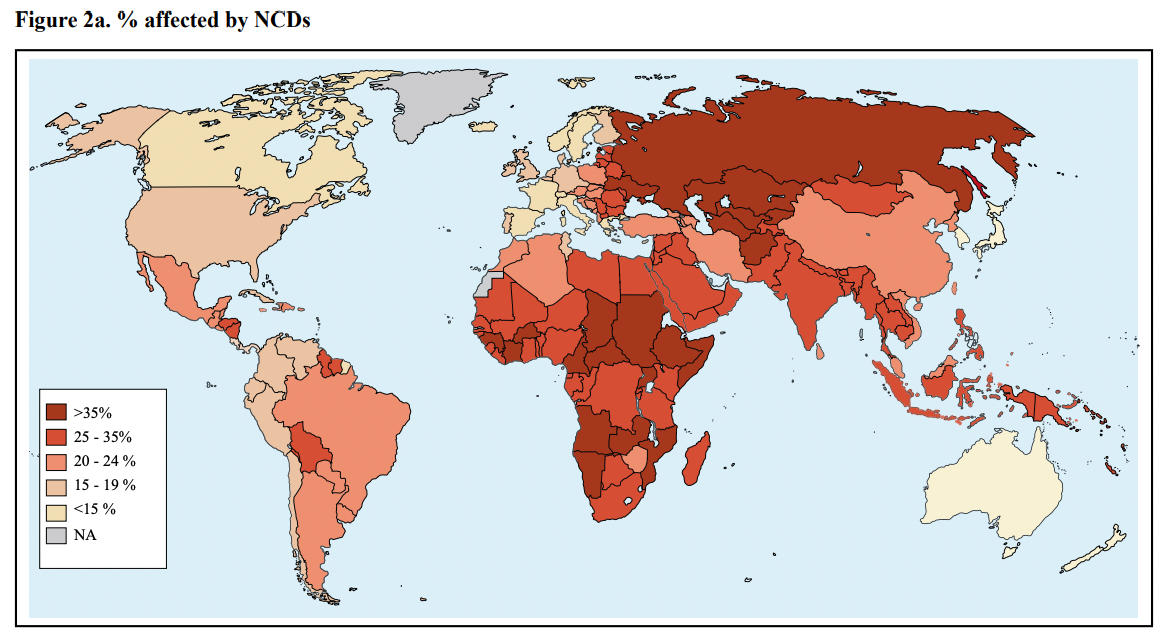 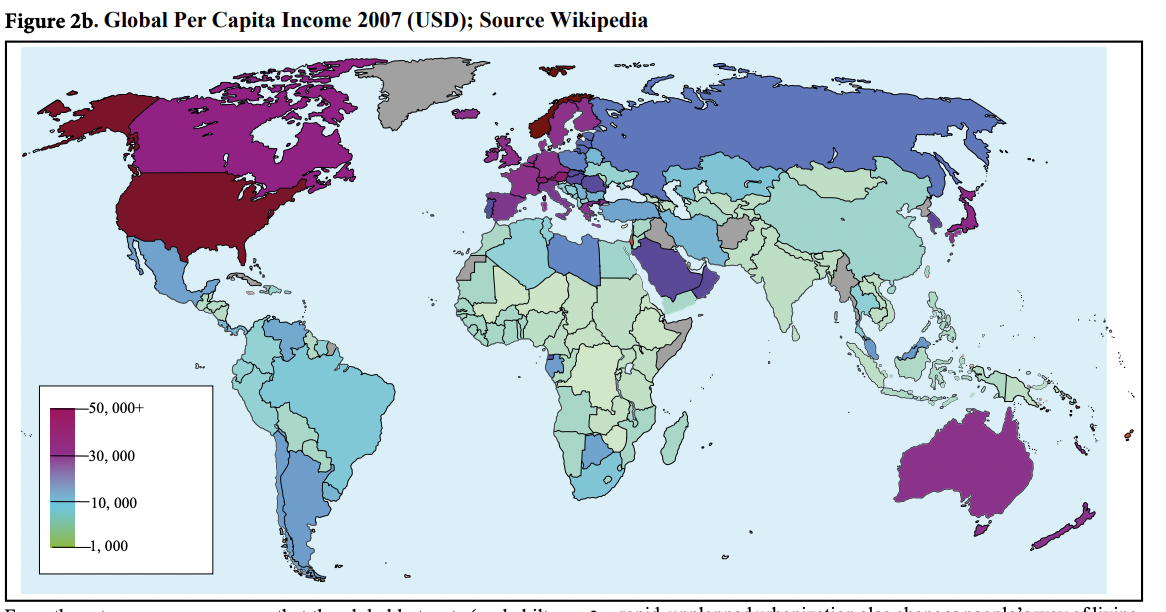 As can be seen above in Figure 2, the majority of countries affected by NCDs, such as Africa and Eastern Europe, are all middle and lower income countries. This is especially true as the estimated percentage increase in cancer incidence by 2030, (compared to 2008) will be higher in  both low (82%) and lower-middle-income countries (70%) compared with the upper-middle (58%) and high-income countries (40%) [4]. Differentiating NCDs by just affluence or poverty isn’t particularly useful to understand the global pattern of disease but instead the result of economic development. Those of lower social and economic positions are more likely to die sooner from NCDs compared to those in higher positions, often resulting in driving these poorer members into more poverty. Reasons for this range from the negative effects of rapid globalisation and development in these poorer countries which often result in undeveloped infrastructure and resources to protect members from NCDs and to prevent engagement in behavioural risk factors for NCDs.

Why Is There An Increase In NCDs?

An increase in NCDs is likely due to the ongoing shift in global lifestyles. This is especially occurring in developing countries, hence forming the global pattern above. A number of factors support the growth of NCDs, including:

The Link to Environmental Risks

NCDs and environmental factors are intrinsically linked, hence climate change and NCDs share the similar goal to reduce emissions that is the cause of air pollution and global warming. Steps to control emissions across energy production, transport systems and food systems will produce benefits for both health and the environment.

In Figure 2, we can see that in 2016 the second largest risk factor was air pollution after tobacco smoking. Depending on the population and other factors, in places such as Southeast Asia, air pollution would be one of the biggest causes of NCDs.

More than 40% of people, mainly in low and middle income countries, are cooking with inefficient technology and fuel combinations leading to the accumulation of harmful smoke in their homes. Evidence is emerging that this has caused an increase in NCDs that includes 24% of cases of stroke, 25% of ischaemic heart disease, 28% of lung cancer, and 43% of chronic obstructive respiratory disease [5].

Neurological and mental disorders can also be associated with chemicals and around 1.3 million deaths from NCDs were caused by risks related to chemicals in 2016. To stop this form occurring, safer use of chemicals and more health measures are being carried out. Apart from health benefits, combating air pollution could also reduce climate change.

At the moment, 422 million people have diabetes worldwide and it is becoming a major issue [6].

This figure can be translated to 1 in 11. With the rise of diabetes cases, Technavio analysts have predicted that in 2019 to 2023, the global blood glucose test strips market will grow at a CAGR of over 6%.  Around 39% of this growth will be Americans alone and such a high surge means a lot more money will be spent in this area too. In the UK an estimated £14 billion pounds is spent a year on treating diabetes and its complications [7]. This equates to over £25,000 being spent on diabetes every minute.

One reason for an increase in these figures could be again due to the shifting lifestyles the world is facing.  Obesity rates are one of the main drivers behind the rise of type 2 diabetes. Equally it is also entirely possible that the increasing prevalence of type 2 diabetes is due to earlier and better detection strategies as the symptoms can be hard to spot.

Many are unaware of the real cause behind a disease such as type 2 diabetes. It is a popular myth that sugar triggers diabetes, as many assume the increased blood sugar levels in diabetic patients must be its root cause.

It is in fact not caused by a high carbohydrate diet or sugar but a diet that builds up the amount of fat in the blood. An accumulation of microscopic fat particles within muscle and liver cells leads to glucose being unable to reach where it needs to in the cells despite the efforts of insulin. As a result the pancreas produces extra insulin and glucose builds up in the bloodstream, hence increased blood glucose levels. The combination of insulin resistance and pancreatic cell failure leads to type 2 diabetes, making fat the real culprit. In order to decrease insulin resistance, fat intake needs to be decreased. However one should note a diet high in sugar will also lead to many other serious medical conditions if not contributing to the root cause of diabetes. Furthermore a study by HSPH researchers has found a strong association between both processed and unprocessed red meat and an increased risk of diabetes [8]. This reaffirms the idea that a diet avoiding meat, dairy products and overall fatty foods is a much better precaution to developing type 2 diabetes.

A case study in Sri Lanka has provided the evidence that Type 2 Diabetes is linked mainly to diet, smoking and a poor & inactive lifestyle. Around 25% are suffering from diabetic or pre-diabetic symptoms, and this could double by 2050 [9]. There has also been a rise in BMI in children between the ages of 10-14 and a high number of risk factors are present within the young urban population. In countries like Sri Lanka, there has been a rapid growth of type 2 diabetes.

This can be attributed to a number of reasons:

Figure 4 showing the distribution of diabetes in Sri Lanka

What Is Being Done in Sri Lanka to Combat Diabetes?

There is an increased media coverage raising awareness for diabetes as the government is focusing more of their attention on health issues. There has been development of fitness facilities (such as new jogging tracks), more education and public awareness (such as lectures, workshops, screening and treatment centers) and research into diabetes. The Diabetes Association of Sri Lanka has set-up walk-in screening centers in Colombo that people can attend at a modest cost. They have also collaborated with a research team from Kings College London on an intensive screening, education and monitoring program which has identified young people at risk from developing diabetes. As of 2016, they had managed to lower the risk of people developing Type 2 diabetes by 26% in the previous 5 years. A developing economy like Sri Lanka is finding it challenging to afford the cost of treatment that is rising by 25 US$ each year.

They have also found out in a study last year (i.e. 2020) that there is a genetic overlap between type 2 diabetes and depression for female participants [12].

To help lower the risk, prevention is key as attitudes to diet and exercise need to change, which includes the control of sugar, fat and salt.

What Is the UK Doing to Combat NCDs?

In the UK itself, NCDs account for around 89% of all adult deaths(2016) [13]. The UK is using systems at both local and national levels to try and prevent and intervene early in NCDs. The national government mainly monitors population behaviors and health indicators with a responsibility to enact policies that will optimize the health of their citizens. In 2012, public healthy responsibilities were deferred to local authorities. Local governments are able to work with the community, respond to local needs and also create settings that support healthier lifestyle behaviors. Examples include the NHS health check and National Child Measurement Programme. Both play a key role in preventing NCD, as even local nutrition prompts in a school or leisure centre could make the difference.

There are many studies and research being done to tackle the epidemic of NCDs as actions such as early immunisations to help lower the risks. Screening programmes and social marketing campaigns such as Change4Life are also making a change. These are run by Public Health England (PHE), who are working with the NHS, to solve this issue nationally and globally.

Overall, by reducing the four main behavioural risk factors (tobacco use, physical inactivity, harmful use of alcohol and poor diet), a large proportion of NCDs could be prevented. In order to end the huge toll they take in forms of human suffering and the damage they cause to economic human development, serious action is needed on a global, national and even a personal scale to end this horrible epidemic.

Asmita Anand is a student at Guildford High School. Aspiring to study medicine at University, she shares a wide interest in the field of scientific research and its integration with other fields of study. She is always eager to learn and enjoys researching breakthroughs in science and current problems that are associated with the medical industry.