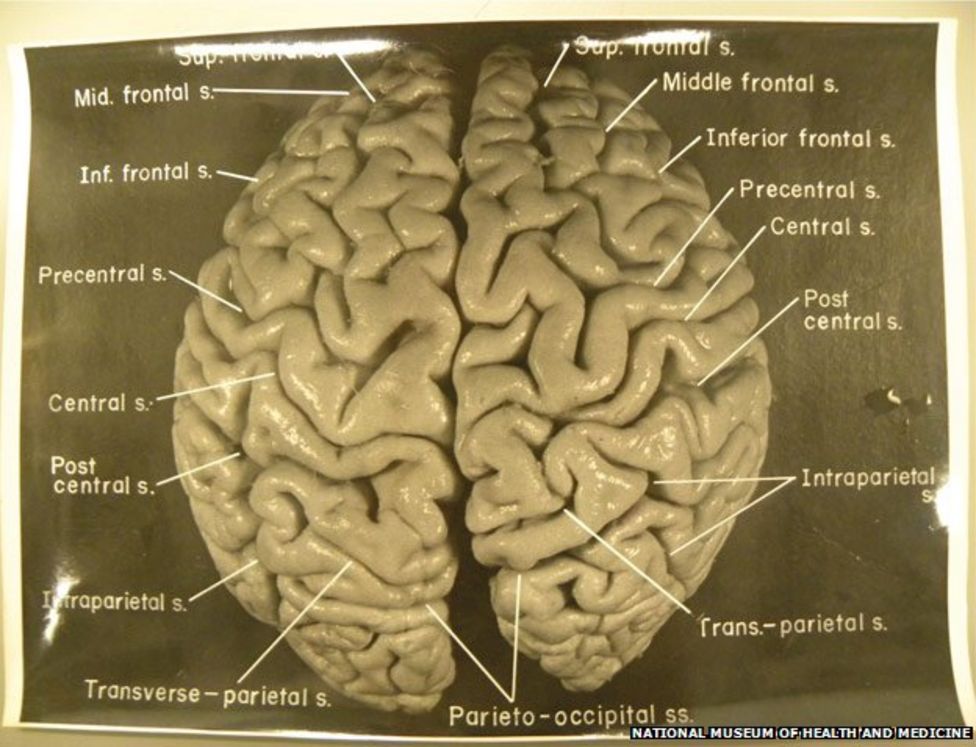 Albert Einstein was a German theoretical physicist who developed the theory of relativity, one of the two pillars of modern physics.

His brain has long been a subject of research and speculation. It was removed within seven and a half hours of his death by Thomas Harvey, a pathologist. 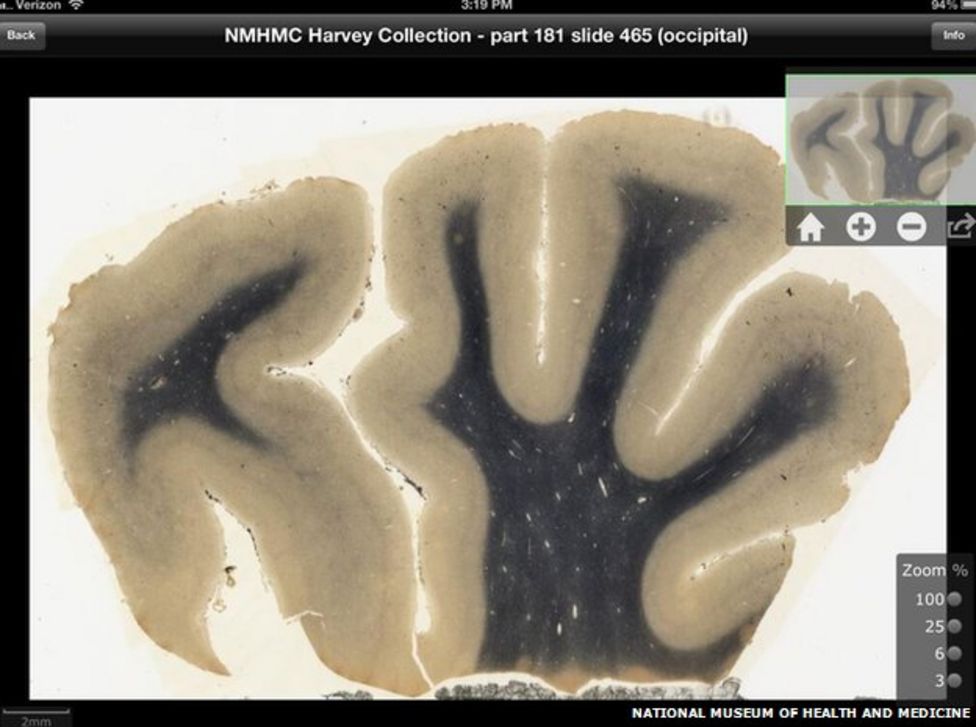 In 1985, Dr. Marian Diamond received four cortical associated sections of the superior prefrontal and inferior parietal lobes of both the hemispheres of Einstein’s brain from Harvey. Glial cells (glue cells) fix neurons into place and keep them supplied with oxygen and nutrients. She made thin sections of the brain, 6 micrometres in thickness, to carry out microscopic examinations of these sections.

The number of neurons and glial cells were compared in four areas of the brain- Area 9 and 39 of the cerebral cortex on the right and left hemispheres in each area. Area 9 is located in the prefrontal cortex of the frontal lobe and is important for planning behavior, attention and memory. Area 39 is located in the parietal lobe, a part of the association cortex which is important for language and several other complex functions.

Dr. Diamond compared the ratio of the glial cells with that of 11 other males. It was observed that Einstein’s brain had more glial cells relative to neurons in all areas studied, which suggested that they needed and used more energy.

In 1996, Britt Anderson at the University of Alabama at Birmingham published a study on Einstein’s prefrontal cortex. The thickness of Einstein’s cerebral cortex (area 9) was thinner than the normal brain but the density of neurons were greater. This suggested that the neurons were more tightly packed which might be the reason for Einstein’s faster processing of information.

In a normal human brain, the Parietal Operculum is a part of the parietal lobe that covers the upper part of the insular lobe from the front to the back. Harvey had reported that Einstein had no parietal operculum in either hemisphere, which was later disputed. An enlarged Sylvian fissure, a deep fissure in each hemisphere which separates the frontal and parietal lobes from the temporal lobe, was also found. In 1999, further analysis was done at McMaster University in Canada by Sandra Witelson in The Lancet, which revealed that his parietal operculum region in the inferior frontal gyrus, located in the frontal lobe of the brain, was vacant, and the Sylvian fissure was absent. Researchers theorized that this vacancy encouraged better communication of the neurons. This was considered the reason for Einstein’s spatial cognition and mathematical thought. 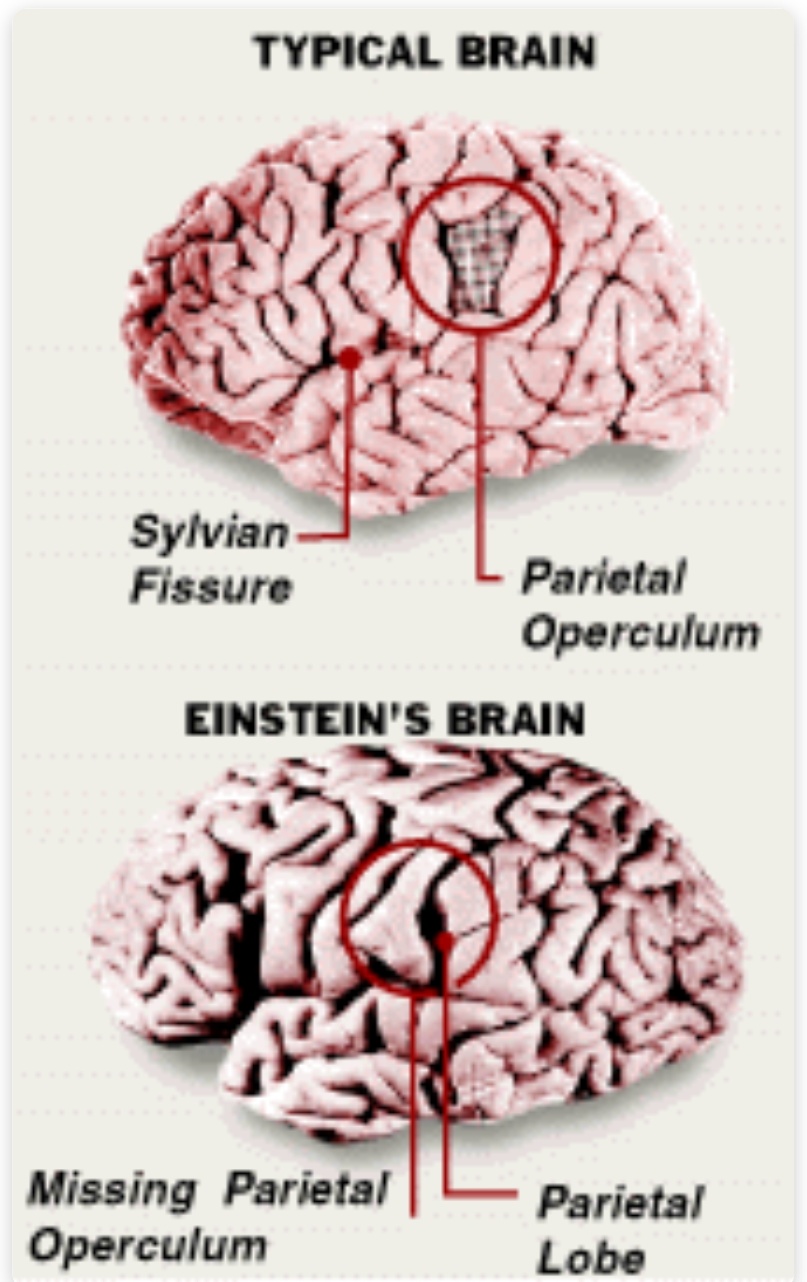 Examination of two slices of Albert Einstein’s brain was done containing the hippocampus, which is a subcortical brain structure containing neurons that plays an important role in learning and memory. The left sided neurons were larger than those of the right side in comparison with brain slices of the same area among ordinary people. Einstein’s left part of the brain had stronger nerve cell connections between hippocampus and neocortex as compared to the right.

In 2012, Dean Falk started working with a previously unseen set of photographs of Einstein’s brain taken by Harvey, in which she found many unusual features. One of which was an extra ridge on the mid-frontal lobe, which is concerned with planning and memory. In a normal brain, there are three ridges, whereas in Einstein’s brain, there were four, which justified that his grasping power and memory was slightly better compared to others. She also found that Einstein’s parietal lobes were dramatically asymmetric, and he had a knob on his right motor strip called the “sign of omega,” which is thought to be correlated with musicians who use their left hands and would apply to Einstein. 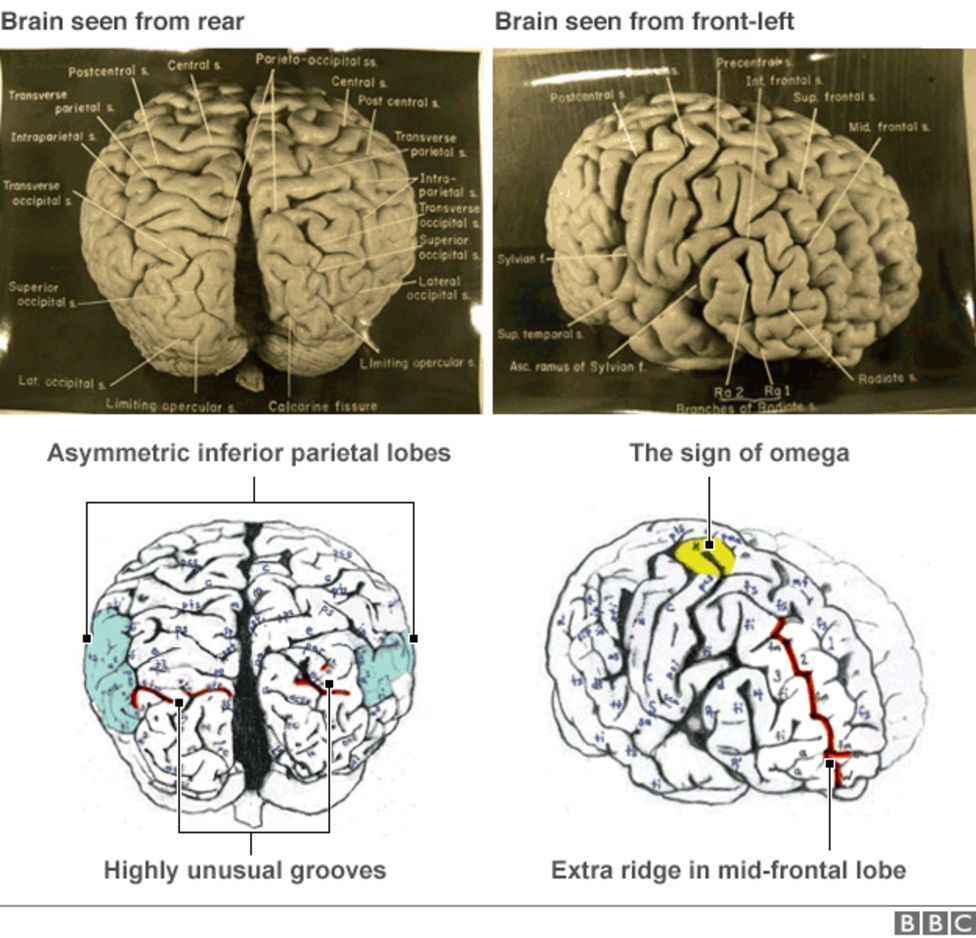 In 2013, Dean Falk studied Einstein’s unusual corpus callosum, a bundle of fibre which connects the two cerebral hemispheres and helps in communication between both the hemispheres. Einstein’s corpus Callosum was compared with that of 15 elderly people and 52 of the same aged people. It was found that Einstein’s brain had thicker corpus callosum than in control groups and had more connections between certain regions of his cerebral hemispheres in comparison to different and same aged people. This suggested enhanced cooperation between his brain hemispheres.

After carrying out the research of Albert Einstein’s brain, there is no clear conclusion that his mind has a significantly higher level of performance than the average humans. With each study and research in detail, the debated points have the equal potential to out-rule the other. Some points are confirmed while others are yet to be ruled out. Hopefully, the conclusion of this ongoing mystery will soon be discovered.