Cause, Symptoms, and Diagnosis

Anti-NMDAR encephalitis is a rare neurological autoimmune disease that can cause severe symptoms [1]. In brief, autoimmune disorders can be simplified as the immune system attacking the body [2]. For this disorder, the immune system has created antibodies against the NMDA receptors, which are responsible for learning, judgment, and autonomic activities like breathing or swallowing. Still, the cause is unknown [3].However, anti-NMDAR encephalitis appears linked to tumors, especially ovarian tumors [4]. In addition, cases appear to occur after a viral infection, especially herpes simplex virus [5]. `

For neurological symptoms, this can include unconscious movement, memory issues, and damage to cognition. However, psychiatric symptoms are more clear from onset. Consequently, anti-NMDAR is often misdiagnosed as a psychiatric disorder. These severe symptoms include paranoia, delusions, and psychosis [1]. Recovery can range from months to years but has improved with the development of immunotherapies [3].

Typically, physicians will recognize these symptoms first and then order testing. This involves testing the blood serum or cerebral spinal fluid for NMDAR antibodies [1]. Besides that, additional testing can be done to detect symptoms. This usually includes tumor imaging, an MRI, or an electroencephalogram (EEG) [3]. Still, first-line doctors like emergency physicians or primary care providers often misdiagnose anti-NMDAR encephalitis as a psychiatric disorder because of its symptoms. Its strong prevalence in women, as approximately 80% of patients are female, also causes misdiagnoses. There is no clear marker, so physicians must be familiar with the myriad of symptoms involved in order to identify it [5]. 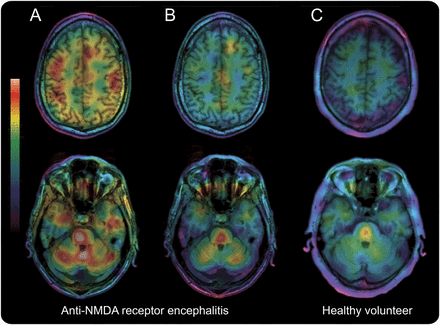 Figure 1. The MRI of a male with anti-NMDA receptor encephalitis, his MRI after treatment, and the MRI of a health volunteer [4].

Patients with the best prognosis have typically had a tumor removed, are young, or have a low concentration of antibodies in their blood serum or cerebral spinal fluid. This usually results in substantial improvement. Conversely, patients who did not have a tumor typically have worse outcomes [5]. The length of recovery can range from months to years, depending on severity and treatment. Early diagnosis and treatment is directly correlated with improved outcomes [3]. However, anti-NMDAR encephalitis is frequently misdiagnosed due to the preponderance of severe psychiatric symptoms. This can hinder a patient’s recovery [5]. Other than removing the tumor, patients can receive steroids or immunosuppressants to weaken the antibodies that are attacking the body [1]. After receiving treatment, outcomes are acceptable. The symptoms subside in the order that they occurred, typically beginning with the most severe issues. Still, some patients continue to experience memory and cognition issues. In the worst of cases, anti-NMDAR encephalitis is lethal, killing approximately 6% of patients[4].

A Dark History for Women

From Ancient Greece, hysteria has been a common diagnosis for women experiencing psychiatric issues, essentially attributing their issues to their gender. However, some scientists propose that there is a logical explanation for this misdiagnosis. Specifically, that explanation is anti-NMDAR encephalitis. This disease predominantly affects women and also causes severe psychiatric symptoms.

Additionally, the removal of ovarian tumors is one of the most effective treatments for the disease [6]. From antiquity, a treatment for hysteria and other health issues in women has been sterilization by removal of the reproductive organs. In removing the reproductive organs, tumors are also excised. One such operation was created by the surgeon Robert Battey, and he referred to it as the “normal ovariotomy”. Originally, this was to treat menstrual disorders and other symptoms. Later on, it was used to treat psychiatric and neurological disorders in women, often without their consent. Even so, surgeons and their communities accepted this, because the patients generally improved. [7].

Additionally, other scientists speculate that anti-NMDAR encephalitis is responsible for historical reports of “demonic possession”.  One of the symptoms are sudden, “jerking” movements of the limbs that are entirely unconscious. In addition, a common psychiatric symptom is paranoid delusions of danger. This appears congruent with descriptions of possession. Once again, because anti-NMDAR encephalitis patients are primarily women, it may have led to the misconception that this gender is weaker and therefore more susceptible to the supernatural or witchcraft [8].

Anti-NMDAR encephalitis is a newly discovered disease, only described in 2007 by Dr. Josep Dalmau at the University of Pennsylvania [9]. Because of its severe symptoms and historical linkage, this led to introspection into the role of women in healthcare.

Much has changed since Battey’s ovariectomies, but women continue to experience issues in medicine. From the perspective of a patient, some women fail to receive psychiatric treatment, because these issues are considered “normal” for their gender. For anti-NMDAR encephalitis in particular, neurologists voice concerns that their patients cannot receive treatment or will be misdiagnosed with a psychiatric disorder. Some diagnoses include insanity or psychosis, whose treatment still includes electroconvulsive therapy. In essence, patients with those misdiagnoses would receive improper care. Rapid diagnosis and treatment are especially important in recovery, but this is hindered by gender issues [8].

One woman voiced her story in the 2012 novel Brain on Fire: My Month of Madness. The author and career journalist, Susannah Cahalan, contracted anti-NMDAR encephalitis only three years after it was discovered. At the time, her doctor estimated that only ten percent were correctly diagnosed. In her personal stories, Cahalan’s doctors grossly misdiagnosed her, ranging from “parties to much” to bipolar disorder. After a few months and the onset of severe neurological symptoms, she was finally diagnosed with anti-NMDAR encephalitis. Her best-selling novel and subsequent has made anti-NMDAR encephalitis one of the more famous neurological diseases. Now, diagnosis is often faster and treatment has improved [10].

Anti-NMDAR encephalitis has an innate link between science, medicine, the media, and society. Specifically, it outlines the path of a disease, from its discovery in science, applications in medicine, coverage by the media, then perception in society. The concern for women and their mental health has not stopped, but it has been ameliorated in the case of anti-NMDAR encephalitis, where patients can get diagnosed quickly enough to have an optimal prognosis. Nonetheless, it is vital that the healthcare industry utilizes the media effectively to advocate for its patients.

I am a teen who studies at a school for biotechnology. There, we learn the fundamentals of basic research. Using the skills I have learned, I hope to pursue an MD/PhD in neurology!